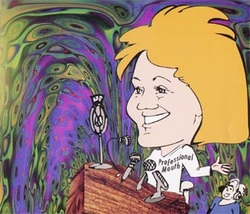 Susan McCollom, is one of the nation's top voice-over talents and owner of VoiceMedia/Susan & Friends Casting since 1988,Her career spans 25 plus years in the entertainment industry. Years in New York landed her roles in the national companies of seven Broadway shows and her television credits run the gamut from featured performer on the "Ed Sullivan Show" to CBS Movies of the Week. However, she has made voice-over the focus of her career. Susan's credits include Clorox, Pillsbury, Marie Callender's, Macy's, Safeway, KRON, and thousands more. She was heard nationwide as the signature radio voice for Albertson's Supermarkets for more than 14 years and currently lends her voice to some of the top video games.